Premature and Low Birth Weight Babies are born with known trace mineral deficiencies because per the Textbook of Pediatric Gastroenterology and Nutrition, pg 631

“Although trace elements make up a small fraction of the total mineral content of the human body, they play an important role in numerous metabolic pathways. The infant born prematurely is at increased risk for developing trace mineral deficiencies. Premature birth is associated with low stores at birth, becauseaccretion of trace minerals takes place during the last trimester of pregnancy.”

Because of these well documented deficiencies, total parenteral nutrition (TPN) is also commonly administered to these infants. Despite the intent to act as a complete dietary supplement, several key nutrients are absent, such as sulfur, cobalt and iron.

Numerous studies show that breast milk is best for babies, and lower incidences of cerebral palsy and other neuromuscular problems are present in breast fed infants. Trace minerals are present in breast milk because they are already part of the mother’s diet. They are considered ubiquitous in a healthy, nutritionally balanced diet, occurring naturally in the environment.

However, breast milk does not contain the higher amounts of trace minerals needed by pre-term infants.

When a pre-term or low birth weight baby leaves the hospital, parents are currently instructed to provide extra nutrients in the form of “liquid vitamins” and common MACRO minerals (see What Are Macronutrients for a discussion about the difference between macro and micro minerals) because numerous studies have already been done demonstrating that breast milk does not contain the higher amounts of essential nutrients needed by these infants.  Poly-Vi-Sol (both with and without added iron) is already standard practice for pre-term infants.

You can use the following chart to estimate how far along in the accrection process your child was when they were born.  In the event of IUGR, use the “weight” calculations to estimate the actual gestation age of your child. 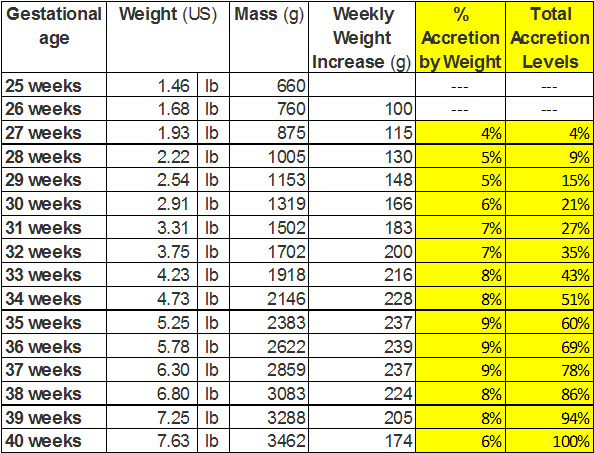 This period coincides with the switch to solid foods which contain the missing trace minerals and the ability to SELF-CORRECT the deficiency issues.

Infants typically begin to respond to correction within 24-72 hours.  (See What to Expect for more details.)

Infants who are not born prematurely and older children can still end up in a deficiency state due to Maternal Deficiency, Absorption Issues, Malnutrition, Exposure to Teratogens and Other Unknown Causes.  See Identifying At Risk Children for details.

The easiest way to determine if micronutrient defiency is the basic cause of the problem is to look for other symptoms, specifically LACK OF APPETITE, CHRONIC CONSTIPATION, DEVELOPMENTAL DELAYS and/or NEUROMUSCULAR ISSUES.

If these deficiencies are suspected, use the protocol for two months.  If there is no change, then discontinue and look elsewhere for answers.

PLEASE REMEMBER: a child with this condition may ALSO have other issues, so common sense is recommended.

Day 70 – He is ALWAYS hungry. I also know he is taller because I have had to adjust his stander height twice in the last month.

Day 122 – Woo hoo!! We gained another pound!!! Yay! His appetite has increased and he’s eating great!

Day 24 – Gained a pound after 10 days on supplement. First weight gain achieved in over 6 months.

Day 72 – [Child]’s appetite has typically been fairly consistent. In the last week, she began taking a new medication for ADD, which has decreased her appetite. Her weight has increased by 2lbs since beginning the PDCM though.

Breakdown version 1 details overall improvement in growth issues first by pre-term versus full-term, then cerebral palsy diagnosis versus no cerebral palsy.  Breakdown version 2 reverses the order of the major breakdowns.  Demographic data suitable for epidemiologists can be found here: Results of Feasibility Study. 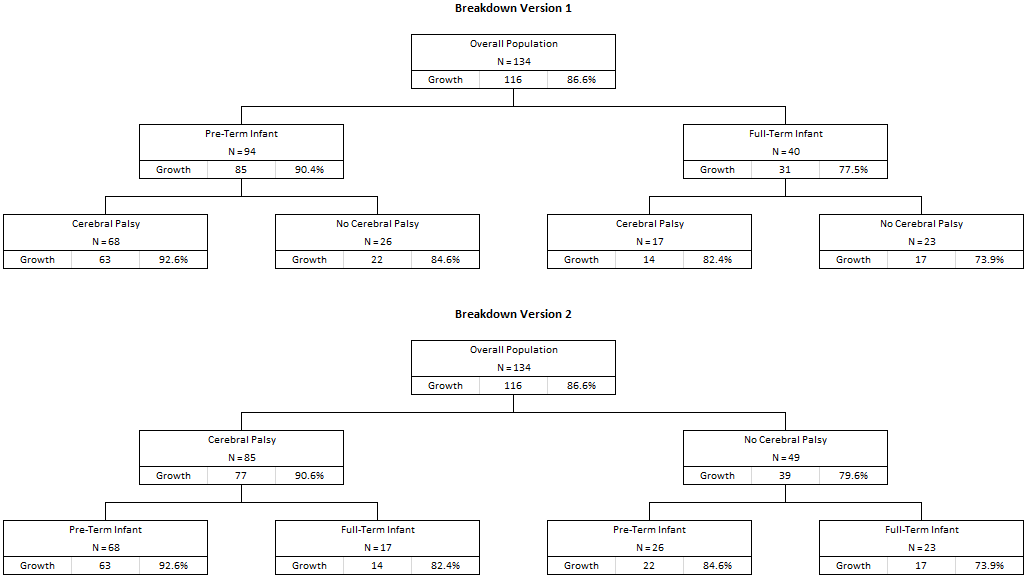 (Mike, I think we also need to do age specific breakdowns by category – thoughts?)

Note to internet folks: Yes, we are still working on this webpage. There is A LOT OF INFORMATION. 🙂