BACKGROUND: The following content was shared with staff at Michigan Health & Human Services on September 21, 2015. This content was originally presented using Microsoft PowerPoint and some standard details normal in a research paper were omitted due to time and space considerations. (Ex: Attrition was not discussed, links to existing research, etc.)

You may print out a standard (8-1/2″ x 11″) version (8 pages) for ease of readability here:  Preemie Growth Project Feasibility Study

This was a feasibility study using a de-identified aggregate limited data set: no IRB review required.

Recruitment began June 11, 2012 and continued through December 31, 2012. Enrollment was open to a heterogeneous group of children from birth through 12 years old displaying mobility issues (including Cerebral Palsy), neuromuscular issues, growth retardation (including failure-to-thrive), cognitive/communication or other developmental delays, or sensory processing issues.

A total of 271 children from 35 states/three provinces and six countries were accepted into the Project. (Two children later formally withdrew.) Of the remaining 269 children, 192 (71.4%) verified they had begun supplementing and were instructed in the reporting process. Data was obtained through a combination of online parent reporting and one-on-one interviews.

All contents well within safe levels for Recommended Daily Allowance (RDA), Adequate Intake (AI) or Tolerable Upper Intake Level (UL) (mg/day) per data from the Food and Nutrition Board, Institute of Medicine, National Academies for both infants and adults (spreadsheet available)

Eight categories were tracked
Primary: Muscle tone/strength, Weight/height, Cognition, Communication
Secondary: Bowel function, Appetite, Energy/stamina, Sensory processing
For each of these categories, the parents reported there was either observed change or no change, and then described the change as being positive or negative. For purposes of this project, positive change was considered improvement. 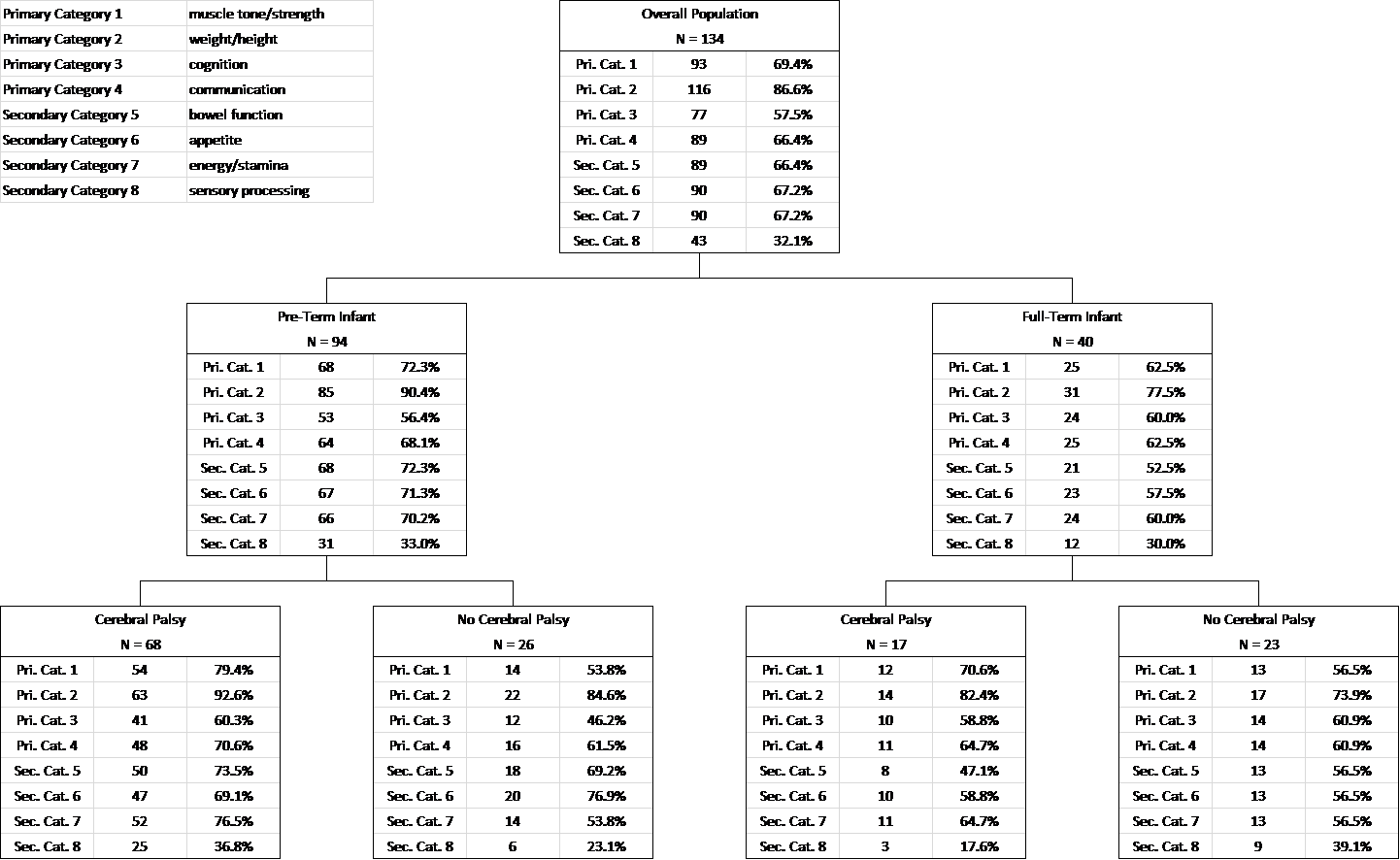 View 2: Cerebral Palsy vs Other 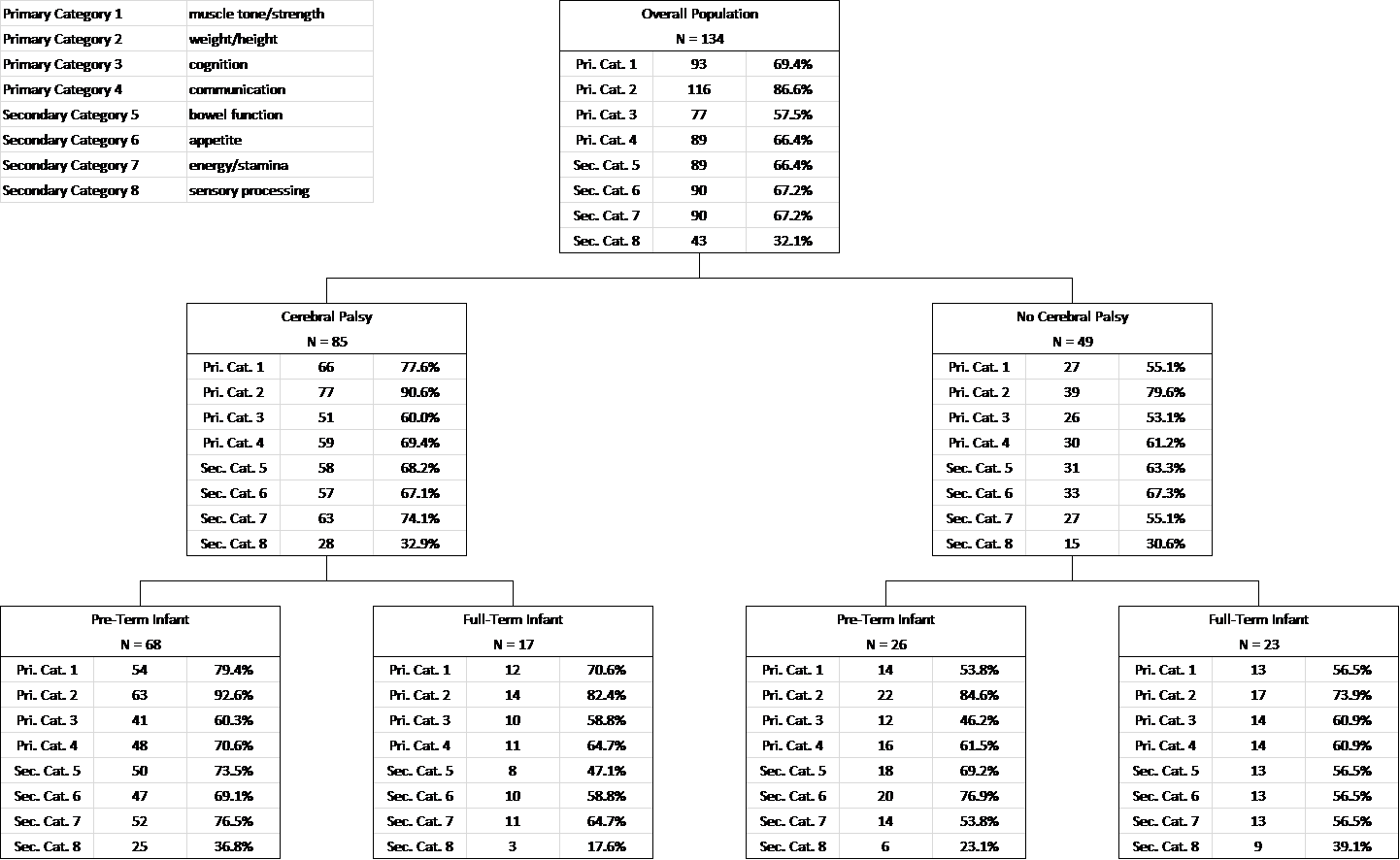 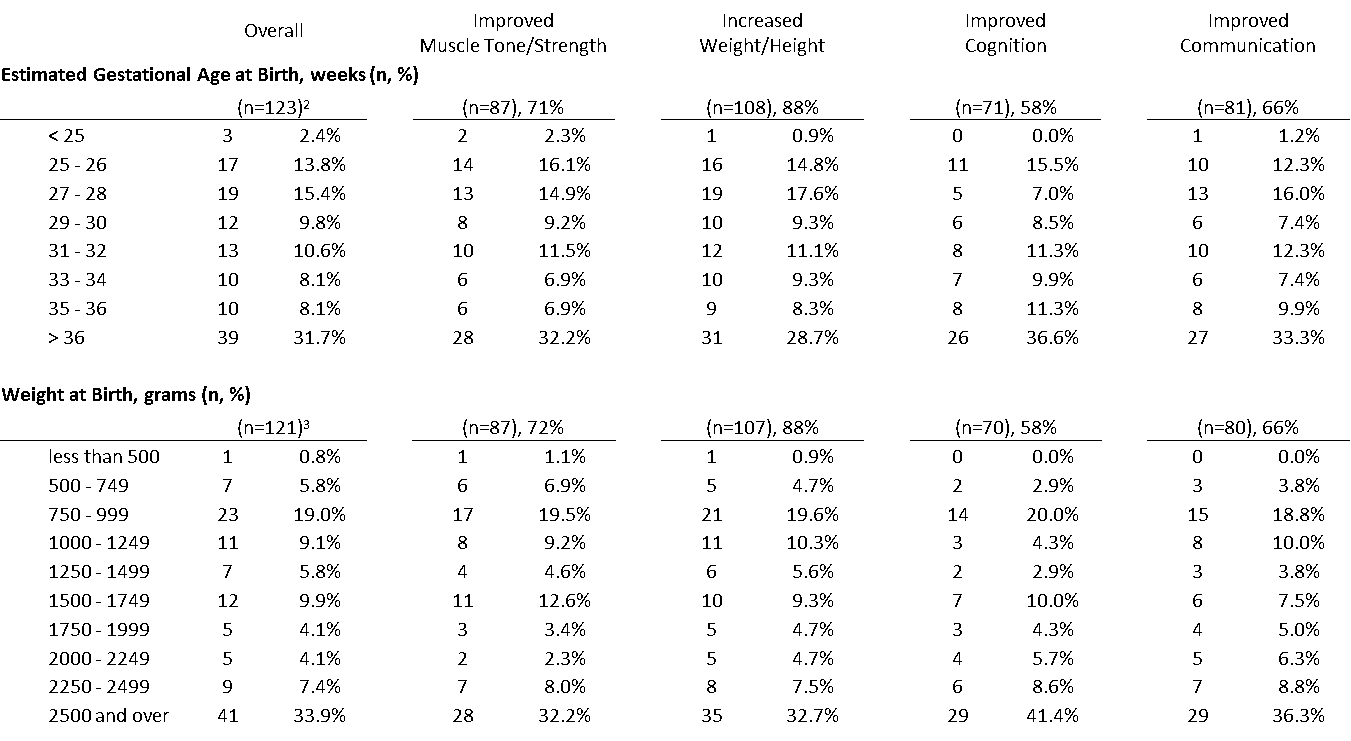 Response to protocol, by Age (Improvement in four or more categories)

Response to protocol, by Gender and Age (Improvement in four or more categories)

Of particular interest was the slightly higher response rate for males in the 1 to 2 year age range – this runs contrary to known gender disparities in childhood growth and development.

Observed Patterns of Improvement
Infants responded faster, in some cases in as little as 24-72 hours. Young children appeared to respond faster than older children.
The first change was usually in bowel function, occurring within the first ten days. This appeared to correspond with an increase in intestinal strength and decrease in constipation issues.
Around 14 days there was an increase in appetite. Again, in infants the change was faster, while older children commonly reported it between days 14 and 21.
Changes in weight and/or height, muscle tone and/or strength, cognition, communication, energy and/or stamina and sensory processing were usually being reported within six weeks.
Despite a high percentage of chronic failure-to-thrive issues in this population, weight and height gains were similar to the patterns seen in non-failure-to-thrive children.
Head circumference changes (if reported) were usually noted within 90 to 120 days.
Muscle tone and/or strength changes typically were reported in the following order:

Sensory processing issues (especially in children with a history of ear infections and/or heavy antibiotic use) were usually controlled within 16 weeks.
It was reported several medically fragile children experienced a significant drop in unplanned hospitalizations.

What does this mean for children diagnosed with Cerebral Palsy?
By definition, Cerebral Palsy (CP) is a group of non-progressive permanent motor disorders that appear in early childhood. Since CP is permanent, any child whose movement disorder improved when their micronutrient deficiency was corrected may never have had CP in the first place – they may have been misdiagnosed.
The ability of increased micronutrient intake to correct deficiency may also explain the small percentage of children under age 4 whose CP symptoms spontaneously resolve – they may be eating a healthier diet that is particularly rich in micronutrients. Self-correction of a nutritional deficit is a reasonable explanation for previously unexplained rare improvement.

Is there any precedent for this “misdiagnosed Cerebral Palsy” theory?
In the 1990s pediatric research established new testing protocols to identify the group of conditions called “inborn errors of metabolism”. Before these tests were developed, patients with movement disorder symptoms would have been placed under the umbrella diagnosis of Cerebral Palsy, and subsequent treatment would have progressed without addressing the underlying disorder. Re-defining these cases as caused by inborn errors of metabolism led to developing specific treatment protocols with substantial improvements in outcomes.
Identifying children whose growth issues are caused by correctable trace mineral deficiency could prevent a potentially common misdiagnosis of Cerebral Palsy.

A Few Words of Caution
Just like when introducing new foods (strawberries, peanuts, etc.) parents should monitor for any sensitivity reactions.

Multiple parents also reported mood swings which they later determined were associated with being hungry; parents were encouraged to offer healthy, nutritious snacks even if they were previously unused to having hungry children.
This may not be an appropriate intervention for children with a history of seizures; parents whose children have these conditions need to be especially vigilant as changes in weight/increased growth may impact the efficacy of medications.
Long-term use of laxative solutions containing Polyethylene Glycol 3350 (such as Miralax) is known to hinder absorption of micronutrients, and therefore children in a deficiency state should not use it regularly.