You may print out a standard (8-1/2″ x 11″) version (6 pages) for ease of readability here:  Micronutrient Deficiency as an Undiagnosed Subset of Cerebral Palsy Diagnoses

Objective: What if a subset of children diagnosed with cerebral palsy (CP) instead or also have correctable micronutrient deficiencies?

Promising preliminary observations using oral supplementation of liquid micronutrient compounds show improvement in movement disorders including muscle tone and strength, gross and fine motor skills, and coordination. Positive changes were also seen in children with growth issues, notably weight, height, and appetite. Children with diagnosed cognitive and communication developmental delays also displayed improvement, as did a significant subset that reported sensory processing issues. However, we have yet to perform a randomized trial to assess the validity of these findings.

How can one design a study to determine if a subset of children diagnosed with CP possess micronutrient deficiencies and whether remedying these deficiencies improves CP?

Methods: Subjects were enrolled from June to December 2012 with an average observation period of 118 days. Enrollment was open to a heterogeneous group of children displaying mobility issues (including CP), neuromuscular issues, growth retardation (including failure-to-thrive), cognitive/communication or other developmental delays, and sensory processing issues. Parents were instructed to administer liquid micronutrient compounds on a consistent schedule and report changes or lack thereof on a bi-weekly basis. Data were obtained through a combination of online parent reporting and one-on-one interviews. Eight categories were defined to evaluate change during the observation period: four primary categories (muscle tone and strength, weight/height, cognition, speech/communication) and four secondary categories (bowel function, appetite, energy/stamina, and sensory processing). For each of these categories, the parents responded that there was either observed change or no change, and then described the change as being positive or negative. For purposes of this project, positive change was considered improvement. 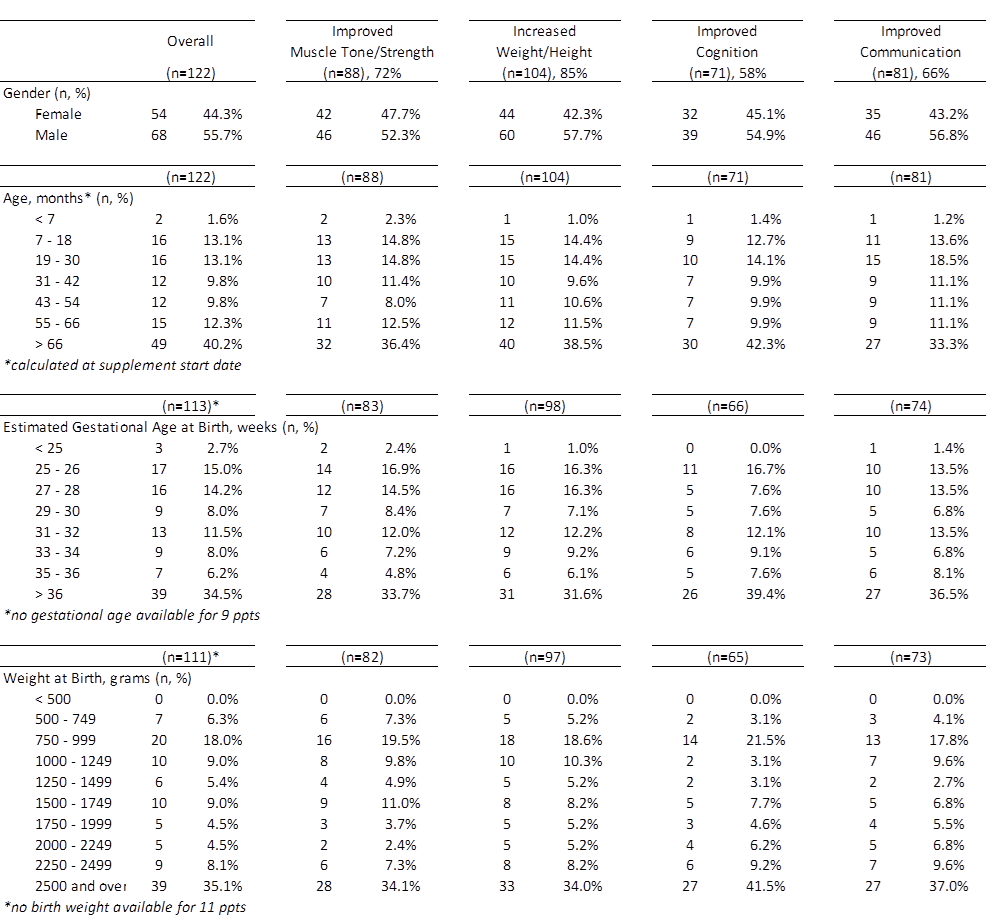 Contents of Compound, per Laboratory Assay by Dose

Note: No initial baseline was established; not all children reported concerns in all categories. 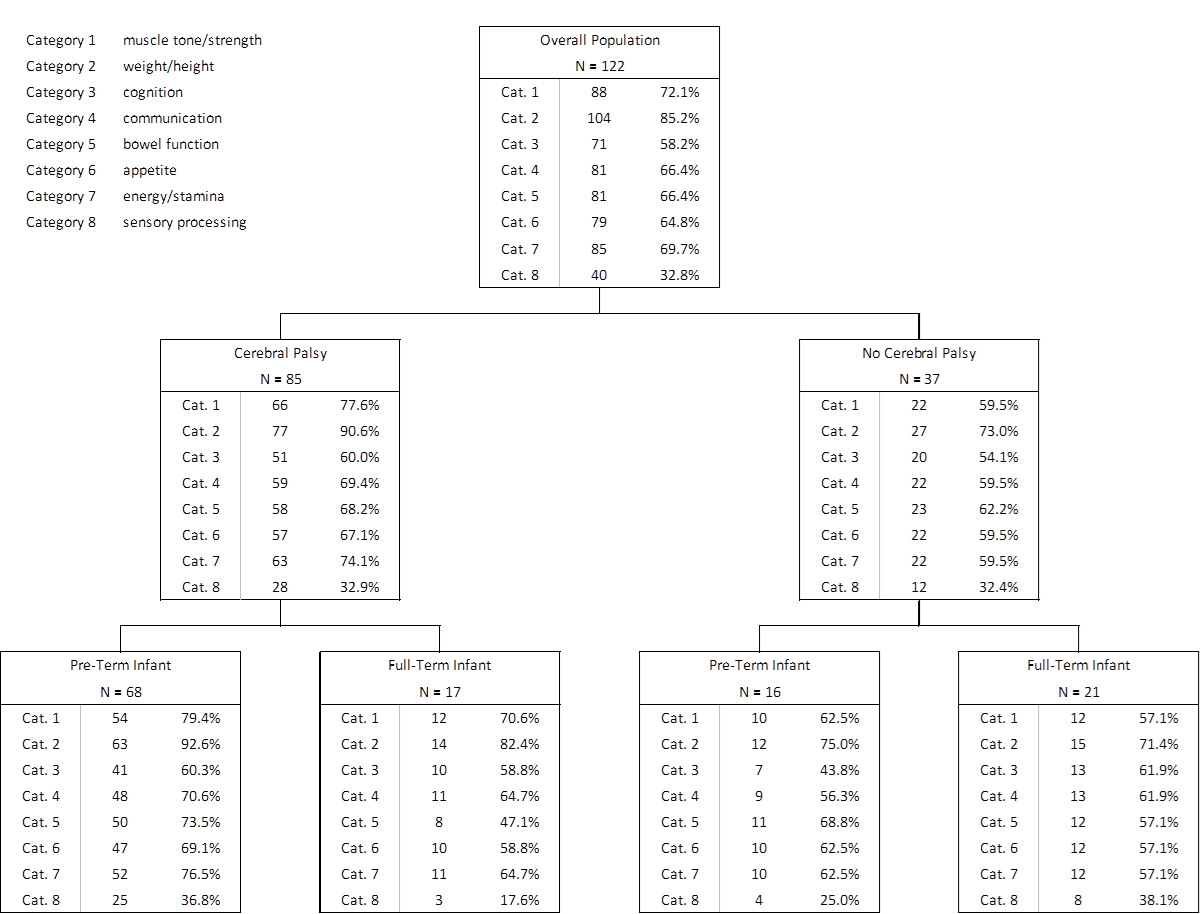 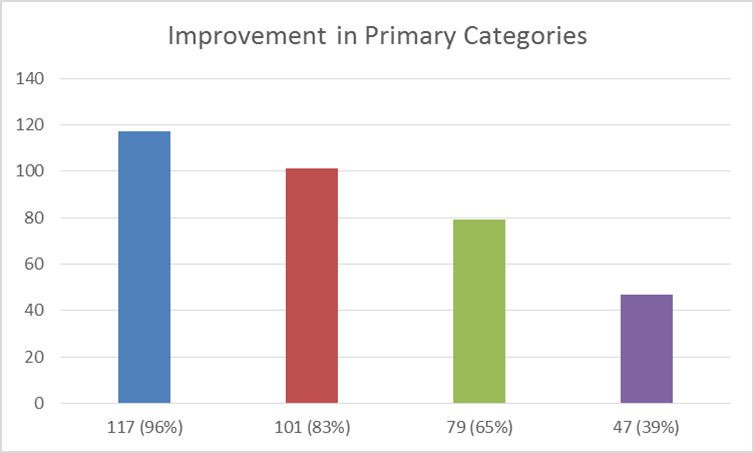 Cerebral palsy has several well-known risk factors including prematurity, low birth weight, and possibly insufficient maternal nutrient intake in pregnancy. The correlation between pre-term birth, nutrient deficiency, and cerebral palsy is the focus of our project.

Animal studies as early as the 1950s have demonstrated the link between trace mineral deficiency and increased morbidity, including poor growth and weak muscles. Veterinary science recognizes the role that trace minerals play in avoiding deficiency diseases, and widespread supplementation from the 1950s to the 1990s has largely eradicated these diseases in farm animals. Trace minerals are considered essential for optimum health, growth and productivity, carrying out key functions as catalysts for enzymes and hormones. In accordance with this established science it is still common for trace mineral supplements to be given to both large and small livestock animals.

In human medicine trace minerals are considered ubiquitous in a healthy, nutritionally balanced diet, occurring naturally in the environment. Healthy human beings are, by definition, assumed to be in a state of homeostasis, with all metabolic needs met, whereas insufficient intake of dietary nutrients leads to deficiency diseases. However, there are certain population subsets that are unable to maintain a nutritionally balanced diet, most notably pre-term infants. The premature infant is at increased risk for nutrient deficiencies, and breast milk, while a preferred food source for full-term infants, does not contain the higher amounts of essential nutrients needed by pre-term infants. Because of this, it is common practice to supplement the pre-term infant’s food intake with vitamins and other essential nutrients. Total parenteral nutrition is also commonly administered to these infants, but despite the intent to act as a complete dietary supplement, several key nutrients are absent, such as sulfur, cobalt and iron.

It has been demonstrated in previous research that the premature neonate is also at increased risk of trace mineral deficiency because trace mineral accretion occurs during the last trimester of pregnancy. This accretion process would logically be interrupted in pre-term infants born at gestational ages of less than 38 weeks. In the case of a diagnosed deficiency of an essential nutrient such as iron, calcium, or Vitamin D, it is standard practice to instruct patients to increase dietary intake of the needed nutrient(s). To diagnose a nutrient deficiency there are well known, standardized tests for essential nutrients, however there are currently no standardized tests for trace mineral deficiencies. Additionally, most trace minerals do not currently have a USRDA, the assumption being that they are already present in minute amounts in the typical patient’s diet.

By definition, cerebral palsy (CP) is a group of non-progressive permanent motor disorders that appear in early childhood. However, not all diagnosed movement disorders are CP. For example, in the 1990s pediatric research established new testing protocols to identify the group of conditions called “inborn errors of metabolism”. Before these tests were developed, some patients with one of these conditions could have been diagnosed with a movement disorder, and being within the umbrella diagnosis of CP, subsequent treatment may have progressed without addressing the underlying disorder. Re-defining these cases as inborn errors of metabolism led to developing specific treatment protocols with substantial improvements in outcomes.

Our goal was to measure the effects of micronutrient supplementation on mobility and/or growth rate in a population diagnosed with, or at risk for CP.

Infants and children who had a diagnosis of prematurity or growth retardation as well as those with CP or other neuromuscular issues who were not necessarily premature were recruited. Liquid micronutrient compounds were administered by parents on a consistent schedule, and observations were documented for eight categories: muscle tone and strength, weight/height, cognition, speech/communication, bowel function, appetite, energy/stamina, and sensory processing. Any changes observed were documented in parent reports.

Based on observational data, 117 children experienced improvement in at least one of the primary categories, the most common being weight and height. Improvement in this category was characterized as “muscular weight gain” usually followed by an increase in height, as per expected growth patterns.

88 children (72%) experienced improvement in muscle tone and strength; these changes were reported as an increase in core strength (trunk) followed by changes in tone and/or strength of the extremities. Changes in strength frequently led to changes in mobility levels, and improved fine motor skills and coordination were often noted.

Certain patterns were observed in the chronological order of positive changes among the participants: improvement in bowel function was most often the first change noted, occurring within the first 10 days after starting the supplements. This change was more often noted in younger children and infants, likely due to older children using the toilet independently. Increased appetite was observed between 14 and 21 days, although if there was no increase in appetite there were still some positive changes in other defined categories. Improvement in the remaining six categories typically began to occur between 42 and 56 days.

We found during the course of observation that relying on parent reporting for specific measurements was a limiting factor – accuracy and completeness was an issue. Another known limitation was the lack of clinical diagnosis and evaluation to establish baseline characteristics. Most importantly, we cannot be certain, without a control group, that there is a causal relationship between supplement and outcomes. We would appreciate feedback on how to identify children who might benefit from this nutritional treatment, and also how best to conduct a randomized trial to properly test the value of this treatment.